Valley Baptist Church had its beginning on January 7, 1970. The first service was held in the community room of the Dieterle Memorial Home in Montgomery. Rev. Tom Corkish preached that service just before he left the area to become pastor of a church in Durango, CO. The services were then moved to the gym of the Dieterich Elementary School in Aurora. Roy Chestnut came soon after to take the position as pastor of Valley Baptist Church. Dr. Chestnut was officially installed as pastor on Mothers Day, May 10, 1970.

A Parsonage was purchased at 30 Briarcliff (in Boulder Hill) for the Pastor and his family to live in. Some of the first year activities were a banquet in July, a big Sunday School "Round Up" in September, and a great Christmas play in December. The highlights that first year were the incorporation of the church on September 2 and the purchase of the present property on the corner of Wolf and Douglas roads in Oswego on October 2 with a ground breaking service on October 30. That building was completed the following year with the first services held on June 13, 1971.

A parsonage was built in 1974 on the present four acres of property. A major addition to the church building was finished in 1991 giving us over 13,000 square feet of floor space for ministry. The Kingsway Bible Bookstore was located there.

In March 2002, Mike Blythe of Indianapolis, IN became the pastor after Roy Chestnut resigned to go full time as a missionary and director of Heartland Baptist Missions. Roy now reside in Pensacola, and still presides as president over Heartland Baptist Missions. Rella went home to be with the Lord in 2019. Their faithfulness and dedication to the work God called them to for all these many years has made an impact on the lives of thousands. Pastor Blythe is married to Barbara and have four children, Nick, Luke, Katie and Nathaniel.

In March 2008 David Hemphill of Powell, Tennessee was installed as the new senior Pastor after Mike Blythe resigned to go into full time teaching at Heartland Baptist College in Oklahoma City, OK. Pastor Hemphill, a  graduate of Crown College in Powell, TN, holds a Masters degree in Church Ministry and a Bachelor's degree in Pastoral Ministry. He previously served for 10 years as a Pastoral Assistant at Regency Baptist Church in Orangevale, CA. Pastor Hemphill is married to Carolee, and they have six children: Ryan, Melody, Courtney, Tiffany, Brandon, Benjamin, and three grandchildren.

The first missionary that the church took on for support was Bill James who was still on the field in Japan after 52 years of service in 2010. From that one missionary, our monthly support has grown to 75 Missionaries and Mission projects. Valley Baptist Church has also sent out more than 25 young men and women who are in full-time Christian service today. 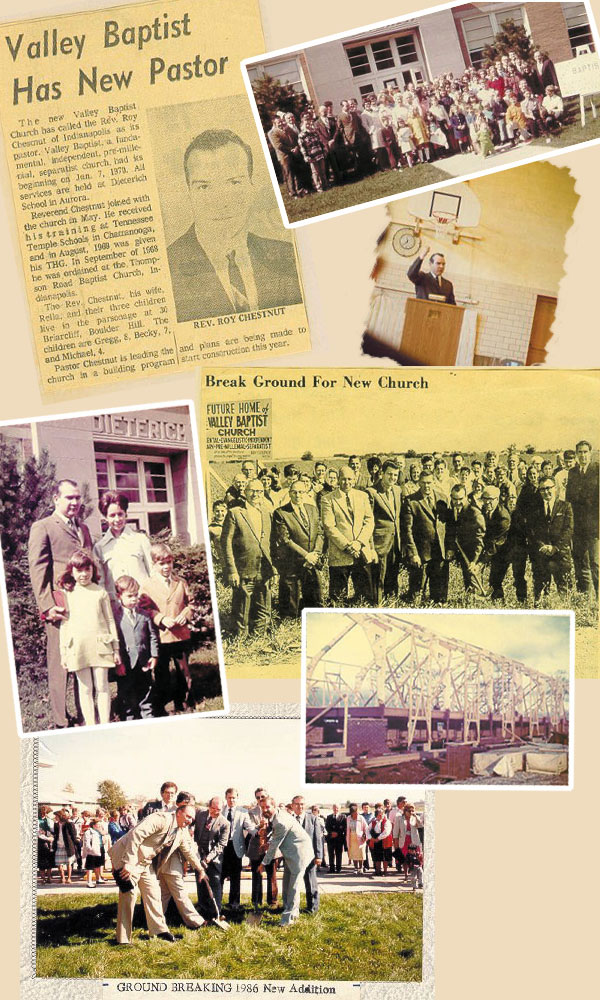